Italian startup Potemine aims to reduce the number of devices needed in consumer environments with its wireless Alis lamp, which can be attached to different bases for specific locations.

In addition to being used on its own, the lamp can be magnetically attached to one of three bases to transform it into a table or floor lamp, or a wall sconce, rather than having three separate lighting products.

Each base also serves as a charger for the light head when connected to a power supply.

The device uses the Internet of Things (IOT) to connect multiple devices together and activate a single point of control for a group of lights.

As Potemine told Dezeen, this technology was developed to eliminate any wiring between the lights, as well as the extra fixed switches on the walls. 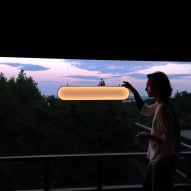 Advanced accelerometers in the lamps also allow users to control them with subtle movements. For example, tilting the device to the left decreases the brightness and possibly turns off the light, while tilting to the right makes it brighter.

The forward and backward movements can be used to control the brightness of a group of lights connected via the cloud.

“Alis introduces a whole new way of living with light, thanks to IOT technology and its intuitive design, the user is able to create flexible lighting systems in places where this was not possible before”, the studio said.

â€œIt’s a ‘one light for all’ system,â€ he continued. “A series of accessories and a patented mechanism transform Alis into a wall lamp, floor lamp or desk lamp, reducing the number of devices in your environment.”

Each of the portable lights has a wifi module that sends data to the Cloud and processes it before sending the information back.

As a result, the studio explained, if a user has four lamps connected and one fails, the remaining lamps will still be able to work and send information to each other.

The product can also be smartphone-controlled through the Alis app and is compatible with smart home devices such as Amazon’s Alexa, allowing users to turn lights on and off with voice commands.

â€œAlis comes from the art of sculpture,â€ said Potemine. “The design team, inspired by [Constantin] Brancusi and [Lino] Sabattini, has created a symmetrical balance between centuries-old forms and disruptive technology. “

â€œAlis is the perfect combination of exceptional design and impressive technology,â€ he added. “It is designed for people who like unique silhouettes but want more from their lamps, and for those who love technology but want more sophisticated looking products.” 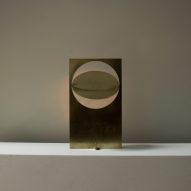 The Alis lamp is shortlisted in the lighting design category at this year’s Dezeen Awards.

Other shortlisted projects in this category include a standalone mood solar light by Marjan van Aubel Studio and a laser-cut metal lamp made of simple geometric shapes.