Although the market is swarming with newer SSDs that support SATA 6Gbps interface, there are very few users who really need them. On the other hand, the huge army of laptop owners (and desktop computer users, too) would be ready to upgrade their systems with SSDs that offer an attractive price / performance ratio without setting any records. of speed. It is for these users that Samsung offers its 470 series products which are not exactly new, but seem like an attractive option. This is not just our opinion, as laptop manufacturers agree with us and install Samsung 470 series SSDs in their products. For example, Apple even incorporates them into its brand new MacBook Air.

Samsung’s 470 series success story is based on Samsung’s second generation S3C29MAX01 controller. It was released in response to the SandForce controllers, but while the latter are aimed at enthusiasts who don’t mind updating firmware regularly, Samsung has focused on reliability.

Another factor contributing to the success of Samsung’s SSDs is Samsung’s own NAND flash memory with DDR interface. The resulting products have spectacular specifications even now. For example, the 256 GB model that we are going to talk about today has a specified read speed of up to 250MB / s and a specified write speed of up to 220MB / s.

Samsung’s 470 series SSDs have capacities of 64, 128 and 256 gigabytes and are specified to have a sequential read speed of 250MB / s and a sequential write speed of 220MB / s. The only exception is the 64 GB model which has a specified write speed of 170 MB / s. Samsung notes that the height of these SSDs is reduced from 9.5 to 7 millimeters, which can be important for high density systems of storage.

The Samsung S3C29MAX01 controller is a complex multi-chip device. It has a dedicated DRAM buffer to ensure even wear of the NAND flash memory. The buffer is based on two 128 MB DDR2-667 SDRAM chips manufactured by Samsung itself. 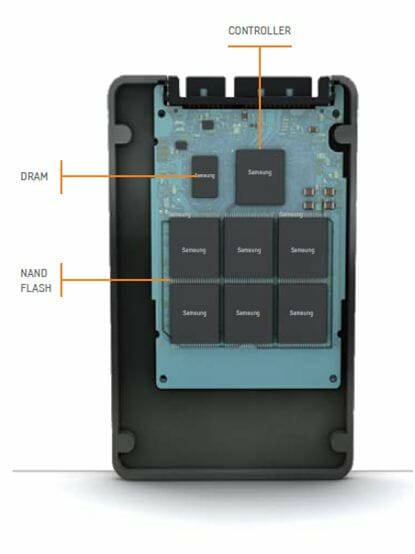 As we wrote above, the NAND flash memory installed in the SSD is also made by Samsung. The chips are labeled K9HDGD8U5M. This is 30nm MLC memory with toggle mode support. The SSD has a total of 16 chips, each with a capacity of 16 gigabytes.

The 1.5 million hour lifespan and 3 year warranty should make the device attractive to consumers, but these are actually the minimum requirements for a big brand product.

The Samsung 470 series is not the last of the SSD generations, so we decided to use a fairly old test bench for this. Replacing a hard drive with an SSD in an old computer can make the latter much more responsive.

We used the following test utilities:

The test bench has been configured as follows:

The following SSDs were compared during this test session:

We have installed generic operating system drivers for SSDs. We have formatted the drives as a single NTFS partition with the default cluster size. For FC-Test, two 32 GB partitions were created on the disks and formatted as NTFS with the default cluster size as well. The drives were connected to the SATA port on the motherboard and operated in AHCI mode.

IOMeter sends out a stream of read and write requests with a request queue depth of 4. The size of the requested data block is changed every minute so that we can see the dependence of the read / write speed sequential drive on the size of the processed file. data block. This test is indicative of the maximum speed that the drive can provide.

Sequential read is a strong point of the Samsung 470 drive. It seems to be good not only as a system disk for reading data, but also as a versatile disk for all applications.

For this test, two 32 GB partitions are created on the tested SSD and formatted as NTFS. A set of files is then created, read from the SSD, copied to the same partition, and copied to another partition. The time taken to perform these operations is measured and the speed of the SSD is calculated.

There are five sets of files that differ in average size and amount of files, but we will discuss only three as the most illustrative: Installation, ISO, and Programs. Their names are pretty self-explanatory.

Although the Samsung did not perform very well in the IOMeter Synthetic Benchmark Read Test, it performs well in FC-Test. This means that Samsung has optimized the player’s firmware for real file systems.

The next group of tests shows the speed of copying files. The Samsung has no opponent among SATA 3 Gbit / s drives thanks to its high write speed.

This program was created by the developers Intel to test external drives with network interface, i.e. NAS devices, which is reflected by the name of this utility. However, it was found to be suitable for testing all storage devices, including flash drives and SSDs. The only requirement is that the drive has a logical device letter assigned to it and that it is large enough to accommodate the test file set.

The principles of how this test works are quite simple. There is a set of files created on the drive under test, and the test interacts with them using special scenarios. All scenarios describe the disk operations applied to the drive under test (file, offset, storage capacity, and operation – read or write).

A standard set of tests includes the operation of the drive as a streaming data source (HD read tests), the read and write speed of the fileset (similar to the FC test), and tests with meaningful names. – Photo album and content creation.

The logic behind these results is very simple. In scenarios that require a lot of writing, the Samsung 470 easily outperforms all of its competition. In scenarios where reading dominates, the performance of the Samsung SSD is not so impressive anymore and it is lost to the drives built on the SandForce controllers.

We will now be running the latest version of PCMark called Vantage. Each subtest runs ten times and the results of the ten runs are averaged.

Here is a brief description of each subtest:

Based on these subtests, the player’s overall performance score is calculated.

The Samsung did not stand out from the crowd in PCMark tests. But as you can learn from the test descriptions, PCMark focuses on read operations, hence the results.

Samsung’s 470 Series 256MB SSD came as a surprise to us. You would think the market is dominated by Intel products or SSDs based on SandForce controllers but that is not true. Some manufacturers have something up their sleeve like the Samsung 470 series which seems to be the best SATA 3Gb / s SSD, making it a perfect option for upgrading older laptops or desktops.

The amazing write speed we noticed in synthetic benchmarks was also evident in every actual test, so your computer won’t be slow in everyday tasks with this SSD.

As for the price factor, the Samsung 470 series 256GB drive costs up to $ 400, which is a lot. The 240 GB OCZ Vertex 2 can be purchased for $ 350, for example. But the good news about Samsung is its high build quality. We’ve never heard of any issues with Samsung controllers, so the 470 series seems like a reliable solution with a top brand guarantee.